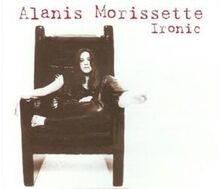 "Ironic" is a 1996 song by Canadian artist Alanis Morrisette, featured on her album Jagged Little Pill. It was briefly featured in the episode "Format Wars". After Ben asks "Kind of ironic, don't you think?" after mentioning that laserdiscs make movies recorded on VHS tapes look better, the song begins to play, leading to him screaming in horror off-screen. Most likely, Ben doesn't like Alanis Morrisette nor her famously "screamy" voice. However, on 2nd Ask The Archive Live, he said he doesn't actually hate the song--in fact, he likes the concept of the irony of the ironic things in the song not actually being ironic (try saying that 10 times fast).

Retrieved from "https://oddity-archive.fandom.com/wiki/Ironic?oldid=4884"
Community content is available under CC-BY-SA unless otherwise noted.